I’m interested in getting into the digital modes more in ham radio, particularly on HF. Aside from a few purpose-built devices, like the PACTOR modems, most of the time digital modes use the sound card in your computer.

The first two parts can be sort of easy, depending on the what connectors you have. Some computers have separate phone jacks for both audio in and out and some radios have the same. In that case, you get a cable, plug the audio out from one into the audio in from the other and vice versa.

However, that was not the case for me. I had to build an interface.

I’m using a MacBook Pro and it has a combined TRRS port, combining headphone out, and mic in.

There’s an extra gotcha on the MacBook, too. If you look in System Preferences ⇒ Sound, it shows you the Input and Output devices. If you plug in a standard pair of headphones, suddenly a new Output device will appear, “External Headphones”

But something different happens in the Input tab when you plug in a TRRS connector. Normally, it looks like this:

That “MacBook Pro Microphone” is the built-in microphone typically located under the speaker grille next to the keyboard. But that’s not what we want. We want to use the mic input that comes in from the audio jack.

So, just plug in a TRRS cable, right?

When I plug in my white Apple earbuds, that have a built-in mic, it changes to this:

That’s exactly what is needed; the “External Microphone” entry. However, when I plug in just a regular TRRS connector, it doesn’t switch over. What gives?

The solution (that I found surprisingly difficult to find on the Internet) is that the Mac (and iPhones that still have the headphone jack) need to detect a certain amount of resistance between the mic (sleeve) and the ground ring. It needs to be about 10 kΩ or greater. I tested this by using a TRRS connector and just touching a 10k resistor to the mic and ground. Suddenly “External Microphone” appears as an output.

The Alinco DX-SR8T radio has a connector for the mic/PTT and two connectors for audio out, Speaker “SP” and “PHONE”.

I chose to use the “PHONE” jack for audio output, because the “SP” jack is needed for a serial rig control connection to a computer. That’s not necessary for this interface, though.

There is one downside of plugging anything into the headphone or speaker jacks; it silences the internal speaker. Sometimes this is what you want; the noises from the digital modes can be hard on the ears, but sometimes you want to be able to hear what the radio is receiving. To do that, it takes a audio passthrough app, which is a surprisingly difficult feature to find on the Mac, but I will save that for a future post.

The mic connector is an 8 pin round connector. I was floored by how many different variants of 8 pin connectors I found on Digi-Key. Finally, I found a pack of connectors that looked like what I had, on Amazon.

To tie everything together, I went with the “EASY DIGI™” Sound Card Interface kit. This comes with all the components and needs to be soldered together. 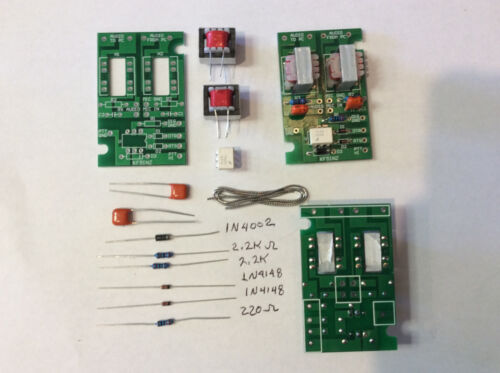 You could just make a cable that directly connects everything together and skip the board, but this kit contains audio transformers and and an opto-isolator for the PTT to keep any electrical noise from the computer from leaking over to the radio. I especially like the handy PTT circuit.

Once the audio in and audio out connections are figured out, there is one more tricky bit to figure out. When your computer is sending audio out to the radio, it also needs to tell the radio to transmit, and that involves triggering the “Push-to-Talk” (PTT) button.

Some people are content to simply turn on the “VOX” function of their radio and let it distinguish when a reasonably strong audio signal is coming from the computer, instead of silence or low volume noise. There are a couple potential problems with this approach. If your radio doesn’t detect the audio signal fast enough, it can cut off the first couple milliseconds of your transmission. That’s not usually a problem if you’re chatting with someone, but for a digital transmission, those first few milliseconds can contain important data.

Another problem is if your radio audio out and your system audio out are one and the same. If you are using VOX, and you get a bleep or bloop from a system alert, it can cause that to be transmitted over the air.

Because of this, it’s better to deliberately key the radio. But the challenge is, most modern computers don’t have a lot of output options that are compatible with a radio’s PTT circuit.

Because my MacBook Pro does not have any old-style “D”-connector serial ports, (In fact, it’s been many years since I’ve seen a computer with a serial port) I have to use a USB-to-Serial adapter.